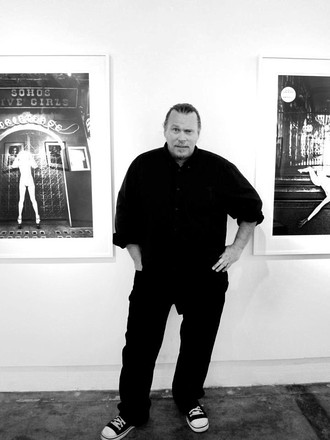 Gary Breckheimer is a New York City-based photographer, and has been pursuing his craft for over two decades. After attaining a BFA from Brooks Institute, he moved to New York City and eventually to Europe, where he was published in many international magazines. MAX Mag, Playboy, Vogue Sposa to name a few, for his fashion and portraiture.

Breckheimer then made the transition from Fashion to Fine Art, and developed a propensity for Black & White imagery. He predominantly focuses on juxtaposing the perceptible beauty of the female form against our manufactured environment. His intent, he explains, “is to allow viewers to contemplate the relationship of the human form and the urban environment. Observing my choice of location, placement and positioning of the model, use of props, along with my use of light and lines, each viewer is able to surmise his or her own conclusion about the relationship of humans and their environment. This is why there is an element of the unexpected, mixed with an overtone of solitude yet erotica in his work. As an artist, his goal is to create photographs where the story, the meaning is not immediately obvious, but to take photos that lure viewers back for deeper consideration so that his vision of humans relationship and sexuality can spawn infinite conclusions.